This popular strategy has gained a reputation for being both reliable and safe. This tool acquired its name because it entails the sequence of purchasing an asset at different price values. As such, the structure of this process reassembles a ladder because under certain conditions the market has a tendency to advance by predictable increments over predefined time periods.

These feature imply that price will create a ladder formation comprising a series of designated steps or levels. The distance between each step tends to be equal as well. A successful ladder strategy requires that the price of an asset must hit each predetermined level before expiration. Ladder strategies provide a number of benefits for traders who use them.

They are normally constructed using the pivot point technical indicator which displays important price levels of an asset and is utilized to predict its future movements. Key pivot points are identified by calculating the average of important price values, i.e. low, high, open and close, which were achieved during a specified time period.

If the market then tends to trade in subsequent time-frames above the pivot point, then it is considered to be advancing in a bullish trend. Alternatively, if price declines beneath this level, then it is deemed to be moving in a bearish channel. Traders have also adopted the practice of calculating and displaying the key support and resistance levels associated with pivot lines. These three levels often indicate major reversal points at which major price reversals occur. For example, price often peaks at either pivot or resistance levels in a bullish trend while it frequently bounces higher against supports in bearish channels.

As exponents of ladder strategies must have significant knowledge and experience in the usage of pivot technology, this tool is not assessed to be suitable for beginners. How exactly does ladder growth occur and is it a reliable phenomenon on which to base a strategy? The questions can be readily answered by considering the following example.

Example of the Ladder Strategy

Envisage that a ladder strategy will be designed using the EUR/USD currency pair which is currently posting a value at 1.3100. A number of brokers, such as IG Markets and NADEX, will now determine, by using algorithms specifically designed for the purpose, a series of rising price levels supported by expiry times. For example, the levels could be 1.3150, 1.3200 and 1.3250. The associated expiry times could be 1 hour; 2 hours and 3 hours. They will then present a number of trading options using their trading platforms together with relevant payout ratios.

Subsequently, traders can then utilize a ladder strategy to activate a series of binary options each time one of the displayed levels is achieved. By doing so, they can mitigate their risk exposure by implementing three trades as opposed to just one. For example, normally you would just execute a CALL binary using the EUR/USD as its underlying asset with a target level of 1.3250; an expiry time of 3hours using a wagered amount of $900. However, such a trade involves a significant amount of risk as the chances of price hitting its target are relatively slim.

Instead, you could significantly reduce your risk exposure by implementing a ladder strategy. To achieve this objective, you would need to open 3 CALL binary options using the levels and expiry times identified above. This action could imply that your first option could be initiated immediately at 1.3100 with an expiration of 1 hour; a target level of 1.3150 but with a deposit of $300. Only if this trade is successful would you then activate a second position at 1.3150; target level at 1.3200; an expiry time increased by 1 hour and a bet of $250. Consequently, the third position would be initiated in order to complete the ladder only if price is able to strike 1.3200.

Ladder strategies are a relatively new concept to the binary options world and are considered best suited for advanced level traders. This is because they involve a significant amount of analysis. However, perseverance and commitment to this technique can deliver impressive results and profits.

Essentially, you will need to analyze prevailing market conditions in order to forecast whether the price of an asset will rise or fall. You must then identify three price levels supported by expiry times in order to form your ladder structure. For your position to finish ‘in-the-money’, price must strike all three levels within the designated time-periods.

As you can deduce, this task is quite challenging, especially for novices. However, some brokers will provide you with the option to select the price levels and expiry times which can help minimize your risk exposure. For example, you could opt to reduce the distance between your levels which could increase the odds of price hitting them. However, your payout ratio would drop accordingly since it is directly proportional to step size.

Most traders utilize a combination of fundamental and technical analysis to assist them in identifying the best price levels and associated expiry times. They also incorporate money management concepts into their calculations in order not to expose their account balances to excessive levels of risk. Many experts advise that the initial complex image of ladder strategies wanes significantly as traders become more experienced in their usage.

Andre Witzel
I am an experienced Binary Options trader for more than 10 years. Mainly, I trade 60 second-trades at a very high hit rate. 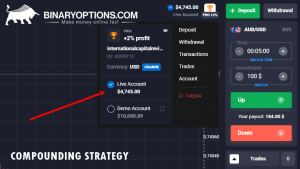 Is It possible to become a Billionair through the Binary Options Compounding Strategy?

Although one can make money using binary options, it requires dedication, consistency, and commitment. It’s because binary options depend on the re...
12. August, 2021