Onions consist of two strikes/barriers per each listed double no-touch, three below, and three above the current underlying price. If at any time prior to and including expiry the FTSE100 trades at or through a strike/barrier then the strategy immediately reverts to lower payout and new strikes.

Onion binary options are for those taking a view on volatility, this has no directional attributes. If the trader believes that the FTSE100 will stagnate then buying the onion will prove a profitable trade. But like many a binary options strategy, the trader can receive a reward in the form of a lower payout for the underlying moving only so far from the current price.

Unlike conventional straddles and strangles, if the punter believes volatility will fall then they buy the onion, not sell it, since onions have negative onion binary options vega.

Figure 1a represents the situation where neither of the inner two strikes has been touched and there remains the possibility of this FTSE100 onion settling at 100.

Figure 2 reflects the situation where one of the inner two strikes has been touched but not the outer two sets of strikes. This means that the possibility of a settlement price of 100 has disappeared along with the inner double no-touch strikes. The next payout is 40 with strikes of 5900 and 6100.

Figure 1a illustrates that as the time to expiry decreases the value of the onion increases which indicates a positive onion binary options theta.

Returning to Figure 1a the fair value of the onion with 1-day to expiry (red) is 63.5 meaning that the onion binary options theta midway between the inner strikes is 36.5. A correct call on the lack of movement in this market can therefore generate a 57.5% return providing the FTSE100 does not move 50 ticks up or down. The FTSE100 5950/6050 double no-touch with 1-day to expiry and 15% implied volatility has a fair value of 42.59, so the difference between the onion (63.5) and the double no-touch (42.59) is 20.9 which is the value of the rebate at that point.

The 25-day profiles of all three Figure 1 profiles never get above a fair value of 0.65, therefore, stating that the FTSE100 will never remain within a 150 tick range from the underlying level of 6,000. This could then represent a very cheap route into shorting volatility as the following focus on.

At 25% implied volatility the profiles never rise above a fair value of 3.20 so yet again the onion can provide extremely high gearing for trading the equivalent of shorting a straddle in the conventional market. At 15% implied volatility the fair value has risen to 16.95 (+430%) and in order to generate that sort of return shorting conventional straddles or strangles one would have a massive initial margin.

The gradients of Figures 1a and 2a suggest that the onion is totally the wrong instrument for directional trading, as confirmed by the onion binary options delta. The strikes would need to be very wide and the only worthwhile trade might be to buy the onion just inside a lower strike or sell the onion just inside the upper strikes. But of course, this runs the risk of the underlying touching the nearest strike, and the payout is immediately reduced.

Onion binary options gamma is even more prosaic than the delta and just underlines how difficult this option is to manage as a market-maker. Do not expect tight quotes!

The method of evaluating the option is as a series of double no touch binary options:

The correct method to establish the fair value of the double no-touch is the Fourier Series and the website intimate offers a clear and concise appreciation of Fourier’s methodology.

Stefan Ebenfeld, Matthias R. Mayr, and Jürgen Topper have written this great paper An Analysis of Onion options and Double-no-Touch Digitals which is quite comprehensive. The equations for the greeks might provide a clue why I go for the finite difference method when evaluating the greeks. 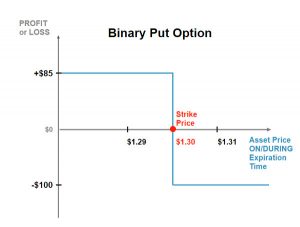 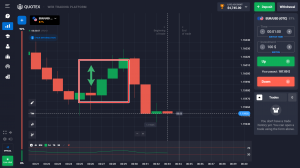